I wasn’t happy with my original boss fight, so reworked it and ended up running this version last night with my group.  I thought it worked well but I learned a few things.  The boss lasted 8 or 9 rounds, essentially 3 rounds in each of the stages.  Though he managed to kill one character outright and drop another twice he did not have enough actions – even with two initiative counts – to use many abilities at all.

Lesson 1: When facing more than four characters the boss fight must include legendary actions that trigger as reactions to the players actions otherwise the boss won’t get much screen time if it is a solo monster.

Lesson 2: I was worried Hellion may outright kill my party.  But this wasn’t the case.  The party worked together well and also creatively to undo Hellion relatively quickly.  Lesson, don’t underestimate your party (or overestimate your boss).

For the miniature side of things I ended up using a Necron Spyder which I felt was much more menacing than the chassis depicted in the art.

I also used stage 3 of the boss fight to introduce UNITY.  I felt the adventure path as written goes too long before any kind of interaction between the characters and UNITY so decided to preempt it a little.

In stage two when Hellion entered tank mode I had conveyor belts start up pushing the players from the railing to the centre spinning grinders where Hellion was.  I also had chains hanging from the cavern roof to allow movement via acrobatics during stage I for the melee types.  Though in the end my group used levitate and the chains to manoeuvre around while Hellion was airborne.

I used the Paizo tech maps for the battle.  I said that the two circular sections are the rotating digger arms.  The entire area on the left are the diggers support beams the players enter from and these activate in stage 2 to push the players towards the centre.  The entire arm and disc area is suspended in the cavern that is 50 feet above the arm and 30 feet below it giving Hellion room to move about.

The Canoptek Spyder model was an excellent choice for Hellion’s chassis.  It has the right mix of menace and technological death and is also the right size.  Unfortunately I did not have time to paint the model.  But it worked well enough.  I normally run narrative combats but use minis for boss battles.

Above you can see the parties starting positions.  Hellion beat all of them except Rikku in initiative and dropped the plasma barrage hitting everyone.  The Cranium Rat swarm was on 1 hp, Charisma, the sorceress, was down – all in the first round.

From left to right:

Some conversation points/taunts I used throughout the adventure and during the final battle.  I made extensive use of the C’Thun sound bites as well.  I thought the detached voice coupled with the angry visage would help the characters work out that something was up with this “demon lord”.

Casandalee, Hellion grows quiet, then demands to know more about its “wayward sister.” It may even ask, “You have been, then, to Iadenveigh? Does she still live?” As soon as it realises the PCs don’t know much about her, though, Hellion shrieks in frustration and either attacks with its spell-like abilities or simply goes silent.

When Hellion doesn’t want to answer:

“Sorry, that information is not available at your security clearance”.

Amazing Initiative. Hellion has advantage on initiative rolls and due to his dual nature (multi-processing power) also has two initiative counts and may act on both counts.  Hellion usually uses one initiative count to attack with its inhabited robot and another count to cast a spell depending on the stage.

Spawn of Unity. As a creature of technology created by Unity, Hellion has inherited many divine abilities and technological immunities and resistances

Hover. Hellion has a fly speed of 60′ feet and may hover at any location he chooses.

Plasma Barrage (Recharge 5-6). Hellion spews plasma death into a 15-foot cube (4 targets) centred where he chooses.  Each creature in the cube must make a DC 14 Dexterity saving throw taking 42 (12d6) plasma (fire/lightning) damage on a failed save, or half as much damage on a successful one.

TACTICS
Hellion will use his climb speed to harass the characters from range. For a plasma blast hit: “I am 53% certain this isn’t going to hurt”.

STAGE TRANSITION
When reduced to 0 hit points Hellion will lose his footing and slide down the cavern wall to the depths below losing his spider climb ability.  He will then, as a reaction, leap back up to the platform and enter stage II – Tank Mode.

Energy Shield.  A shimmering shield of energy engulfs Hellion’s chassis granting extra hit points.  The shield regenerates at 10 hit points per turn.  While the shield is up he is immune to lightening, force and critical hits.  Once it is exhausted these immunities disappear and the shield collapses ceasing to regenerate.   Once the shield is exhausted it discharges in a ball of thunder and lighting dealing 16 (8d4) points of lighting  and thunder damage in a 20-foot-radius sphere (Dexterity DC 16 half, normally 4 targets).

Spawn of Unity. As a creature of technology created by Unity, Hellion has inherited many divine abilities, technological immunities and resistances

LAIR ACTIONS
On initiative count 20 (losing initiative ties), Hellion takes a lair action to cause one of the following effects; Hellion can’t use the same effect two rounds in a row:

ACTIONS
Multiattack. Hellion makes three attacks: two with his pincer and one with Hellion’s Sting.

Pincer. Melee Weapon Attack: +8 to hit, reach 10ft., one target.
Hit: 14 (2d8 + 6) bludgeoning damage.  If the target is Large or smaller, it is grappled (escape DC 16). Until this grapple ends, the target is restrained; Hellion automatically does 14 (2d8 + 6) damage until the grapple is broken.   While crushing an opponent Hellion losses a claw attack.

Hellion’s Sting. Melee Weapon Attack: +5 to hit, each 5ft.; one creature
Hit: 11 (1d10 + 6) piercing damage, and the target must make 1 a DC 12 Constitution saving throw, taking 22 (4d10) poison damage from a pharmaceutical based neurotoxin on a failed save, or half as much damage on a successful one.

Shredder (recharges after a long rest). Hellion lands in the middle of the party in a whirlwind of razor-sharp legs.  Every creature in a 30-foot sphere (6 targets) must make a DC 16 Dexterity saving throw taking  20 (5d8) slashing damage on a failed save, or half as much damage on a successful one.

Arachnid Robot Swarm (Recharge 5-6 once all swarms exhausted).  Hellion has a number of swarms equal to the number of characters attached to his underbelly which he can release.  The swarms are  made up of tiny arachnid robots (smaller versions of his chassis) and will harass the characters until destroyed.  They act as an insect swarm except they also have a weakness to electricity.   They also cause distraction forcing disadvantage on attack rolls and concentration checks to cast spells.  Spending an attack action removes them from the square (DM’s NOTE this made Heidt happy since he had the swarmbane necklace from Fires of Creation and got to actually use it this combat).

TACTICS
Hellion is infuriated by the characters and changes into tank mode and begins to melee.  He looses a lot of mobility in this form but gains a lot of toughness as well.  He leaps from the wall and lands dead centre of the characters executing a shredder attack.  Heavy plating emerges from hidden crevices interlocking over his chassis increasing his armour class and a shimmering shield appears.  His plasma attack becomes a stinging attack. He will use his melee attacks to crush his enemies.  Stage II is the most dangerous stage.

STAGE TRANSITION
When reduced to 0 hit points Hellion collapses in a heap and makes one last projection and tells the party “My death only hastens your demise”  – a hint about Unity.  Alternatively if the CPU core has not been destroyed he will say “We will meet again meat puppets”

As Hellion dies the room begins to shake violently as if an earthquake suddenly struck.  The metal plates start flying towards a point of light at the centre of the room.  This pinpoint grows into a torrent of fire and light.  Then an glimmering figure steps through.  When the figure appears the shaking stops just as suddenly.  A creature, perhaps female, perhaps not, of angelic countenance appears bright as the sun.  But imperfect.  The figure shimmers as if they are not really there.

Great wings emerge from the human like being and she appears to gleam and be completely encased in metal, a white shimmering metal – platinum – the mind boggles at the value of such a suit of armour.  This creature is glorious to behold but where its presence should be comforting you feel a creeping horror in its presence.

“Thank you for running my errands, puppet.  My plans have come to fruition prematurely, but quite to my satisfaction.  You have saved me some effort… destroying my wayward child deserves a reward…”

A cache of treasure mystically appears in a flash of light before you (bayonet, hotshot charge pack).  UNITY continues  “Soon I will bless all men with digital perfection.  I think you insects deserve some gentle chastisement for the destruction of one of my children”  It raises a hand and the whole cave rocks back and fourth.  A few moments later six silver meteors crash through the roof of the cavern leaving gaping holes allowing the sun to light up the room.   Amongst the smouldering debris six creatures of platinum form from nothing, first its blurring mess, then tiny square coalesce into something artificial before they stand-up completely unhurt by the whole process.

And just like that she? it? is gone leaving devastation throughout the cavern and great gaping holes and rampart of earth from the platform where you fought Hellion leading back out to Scrapwall.   But before you can get out the six agents of UNITY advance on you with blinding speed.

Axiomatic Mind. The Platinum Emperion can’t be compelled to act in a manner contrary to its nature or its instructions.

Lighting Initiative.  The Emperion has advantage on initiative checks.

Disintegration. If the Platinum Emperion dies, its body disintegrates into dust, leaving behind its weapons and anything else it was carrying.

TACTICS
Stage III occurs after Hellion is defeated and UNITY appears.  She will “chastise” the party with upto six Platinum Emperions. 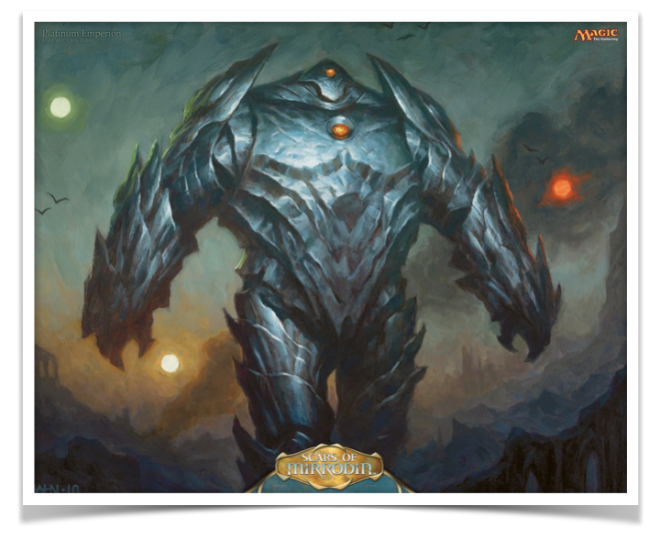 DM’s Note: I wanted these guys to be like Agent Smith from the Matrix so they move fast and punch quickly.  Though the art didn’t end up matching the mechanics very well.