A “named” Ugothokra I used during the Dusklight side encounter.  Apart from the PAX component it can act as the standard look ugothokra in Valley of the Brain Collectors (who are not starved). 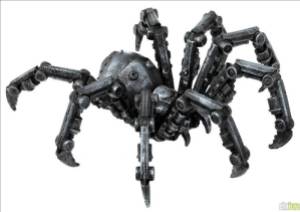 Spider Climb. The ugothokra can climb difficult surfaces, including upside down on ceilings, without needing to make an ability check.

Viral Infection.  The ugothokra can infect a creature randomly (through exposure to its blood) or specifically via its flechette spray.  It can pick which disease to inflect.  If the character fails a DC XX Constitution save the onset time is instantaneous.  It may inflict Cackle Fever, Sewer Plague or Sight Rot (roll 1d6. DMG, 256-257).  Additionally it has one remaining dose of PAX – the virus that sent the crew of the Divinity insane.

This is an engineered disease that targets humans specifically.  While in the grips of this disease, victims frequently succumb to fits of rage. Symptoms manifest 1d4 hours after infection and include fever and disorientation. The infected creature gains one level of exhaustion that can’t be removed until the disease is cured.

Any event that causes the infected creature great stress- including entering combat, taking damage, experiencing fear, or having a nightmare- forces the creature to make a DC 13 Constitution saving throw.  On a failed save, the creature takes 5 (1d10) psychic damage and enters a rage state for 1 minute attacking the nearest creature. The rage is identical to a barbarians rage of equivalent level as the infected character with the same benefits and penalties. The creature can repeat the saving throw at the end of each of its turns, ending the murderous rage on a success.  Any humanoid creature that starts its turn within 10 feet of an infected creature in the throes of a rage must succeed on a DC 10 Constitution saving throw or also become infected with the disease. Once a creature succeeds on this save, it is immune to the PAX of that particular infected creature for 24 hours.

At the end of each long rest, an infected creature can make a DC 13 Constitution saving throw.  On a successful save, the DC for this save and for the save to avoid an attack of murderous rage drops by 1d6 – the potency of this PAX has waned over the years making it less effective than its initial deployment. When the saving throw DC drops to 0, the creature recovers from the disease. A creature that fails three of these saving throws enters a state of permanent rage with their alignment shifting to chaotic evil.

PAX also has a potential  alternate affect. On a roll of 1 the creature enters a slumber and can not be awoken short of the use of a restoration spell.  The creature will dream itself happily into oblivion and eventually die of dehydration and starvation.

ACTIONS
Multiattack. The ugothokra can make a bite and six flechette spray attacks as part of its attack action.

Bite. Melee Weapon Attack: +6 to hit, reach 5 ft., one creature.
Hit: 7 (1d10 + 2) piercing damage, and the target must make a DC 15 Constitution saving throw, taking 18 (4d8) poison damage on a failed save, or half as much damage on a successful one. If the poison damage reduces the target to 0 hit points, the target is stable but poisoned for 1 hour, even after regaining hit points, and is paralysed while poisoned in this way.

Flechette Spray. Range Weapon Attack: +6 to hit, reach 50 ft., one creature.
Hit: 7 (1d4 + 5) piercing damage, and the target must make a DC 15 Constitution saving throw or become infected ignoring onset time.  Otherwise infection progresses normally.  The Black Prince is starving and so this can only be used once until it has fed and had a long rest.

These cybernetic monstrosities were used by the Illithids aboard the Spear of Illumination as the delivery method to infect the Divinity with the PAX. This particular specimen, “The Black Prince” is the last carrier of the disease that reduced the Divinity’s crew to murderous rage.  Fortunately time and age has reduced the potency of the virus.  The Black Prince entered into a hibernation mode once the Dusklight crashed into the earth by spinning an almost impenetrable nannite cocoon to survive after.  It reawaken’s when the characters enter as it senses new life, particularly human life, and seek to continue to execute its orders/programming.