Doc Hellbroth‘s bodyguard.  Lasted 1 round less than the Doc. 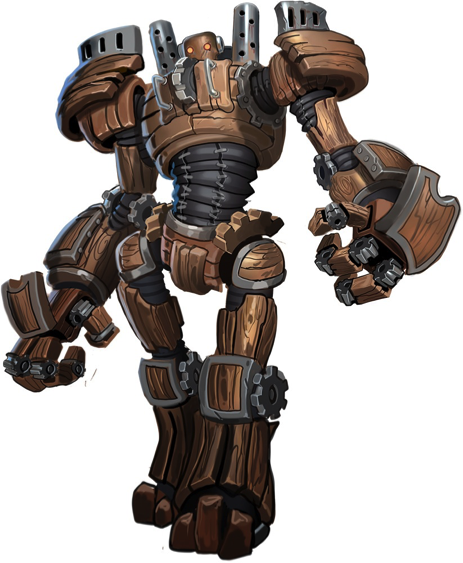 Magic Resistance. The golem has advantage on saving throws against spells and other magical effects.

Slam. Melee Weapon Attack: +10 to hit, reach 5 ft., one target.
Hit: 19 (3d8 + 6) bludgeoning damage and the target is grappled (Escape DC 17). Grappled targets immediately take an additional 22 (2d10+12) points of slashing damage as razor-sharp gears and blades emerge from its body to grind and slice its foe. Grappled targets automatically take this secondary damage at the start of its turn.

Wall of Gears. A clockwork golem can fold into a whirling wall of grinding gears measuring 10 feet by 10 feet or 5 feet by 20 feet. Anyone passing through the wall takes 45 (15d6) points of slashing damage. If the wall appears in a creature’s space, that creature can attempt a DC 17 Dexterity save to leap to one side and avoid the damage entirely. The clockwork golem can take no actions while in this form except to resume its normal form as a move action. A clockwork golem’s AC and immunities remain the same while it is in this form.

REACTIONS
Death Burst. When a clockwork golem is reduced to 0 or fewer hit points, it explodes in a shower of razor-sharp gears and debris. All creatures within a 10-foot sphere take 36 (12d6) points of slashing damage—a DC 17 Dexterity save results in half damage.

DESCRIPTION
A vaguely humanoid shape made of metal lurches to life with the grinding whir and frantic ticking of hundreds of gears.