I am prepping for my next campaign – Out of the Abyss – and the adventure path clearly has a touch of whimsy with more than a passing resemblance to Lewis Carroll’s Wonderland.  They even say as much in the preface.  So I went back and read the two 1e adventures that are much more directly inspired (actually set in) wonderland – Dungeonland and The Land Behind the Magic Mirror.  I picked up some of the encounters in those adventures and decided to convert them for Out of the Abyss.  Since Out of the Abyss uses a lot of random tables these should be easy to insert.  Here are more fungi options.

This encounter should occur in or around The Darklake.

The read aloud text should be modified depending on where The Griffon is discovered.  The text assumes a beach on the shore of Darklake.

After rowing what seems to be an eternity in this endlessly dark lake you spot a strange are along one of the shores.  A patch of many coloured mushrooms sprouts up around an upthrust rock from which has been sculpted a huge statue of a griffon.

The Griffon is an intelligent Figurine of Wondrous Power – Stone Griffon.  It acts as a  bronze griffon (DMG pg. 169) with the following changes – it has an intelligence of 10 and can speak common and undercommon.  It also has resistance to nonmagical bludgeoning, piercing, and slashing damage and has the appearance of a statue.  It can also will itself into existence – and does so at inopportune times.  Finally if it remains motionless, it is indistinguishable from a normal statue.

If the PCs help its friend the Mock-Dragon Turtle it may decide to accompany the party.

This very large specimen is also quite intelligent. It is able to converse in the Common Tongue as well as to  detect thoughts. It appears to be a statue only because it is stone-colored and motionless in sleep. As soon as the party comes near, the monster will awaken.

The griffon will look at the party and then inquire if they are truly interested in gaining treasure—a thought certain to be at least on an adventurer’s mind. Without awaiting an answer, the monster will begin flying toward  an islet further out in the lake. Of course, if the party considers attacking him, the monster will be warned and take appropriate measures—flight or attack as the situation warrants.  If the party is generally cooperative, the griffon will lead them to meet his friend and associate at the islet. In any case, if there is a battle, the griffon’s friend will come to his aid—arriving in 1d4 rounds after the initial round of melee, or standing by its friend if the griffon flees to  the islet. 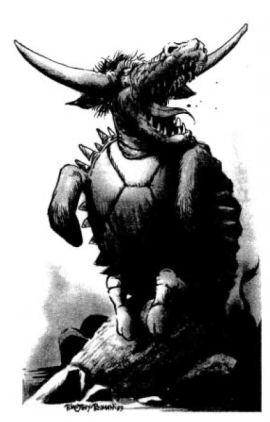 You approach a sloping islet where wind and erosion have turned the cliff to a shady ramp that leads to the beach. Beside this sandy area, resting on a wide ledge of rock, sits a strange creature. It is a mixture of giant turtle and bull: it has a huge turtle body and forelegs, and the tail, hind legs, and head of some monstrous bovine! The griffon hails it warmly, stating that this is his friend and that those seeking treasure should certainly listen to the creature, for he knows where a vast treasure lies.

The Mock (Dragon) Turtle (as a dragon turtle with the following changes – size is medium, it has an intelligence and wisdom of 16 and it is chaotic good.  Also replace its steam breath with a gorgon‘s petrifying breath).

A victim of a senile deep-gnome Arch-Mage.  The mage cast a polymorph spell but never finished it properly, so the quarrelsome dragon turtle turned partially into a gorgon. Although the monster is far different now, both sadder and wiser, the arch-mage is long dead so can not put things right. The mock dragon turtle is desperate to return to his proper form, so he will suggest that the party can gain treasure beyond belief if they will follow his instructions and give him but one thing from all that they gain: a coral and mother-of-pearl flask. The beast will explain that he can no longer venture underwater, for his bull-like head can’t stand the stuff; however, he can direct the party to a species of seaweed that will enable them to breathe underwater for several hours (as the Drawmij’s Breath of Life spell).  All they need to do is eat a large helping of the plant, march into the water at the spot he indicates, and they will walk straight to an underwater grotto filled with pearls, coral, and other precious stuff. Of course, there might be some sort of guardians, but nothing that these brave adventurers cannot handle.  Were he in his true form, he’d quickly recover his own treasure…

If the party agrees to go on the adventure for the mock dragon turtle, he and the griffon will lead them to  Seaweed Beach on the other side of the islet.

The waves of the lake wash rhythmically up, and at this spot they have piled a mound of purplish seaweed. It appears that nothing has passed this way since the tide began falling.

If the mock dragon turtle is with the party, he will instruct them to eat some of this seaweed to gain the power of  water breathing.

If the adventurers decide to go into the water, their guide will tell them to proceed straight ahead for about 200 yards, and there they will find a marine grotto, some 100′ in diameter and about 30’ below the surrounding lake floor (a depth of about two or three fathoms). In the center of this grotto they should look for a large slab of stone, the lid to a stony chest that contains the mock dragon turtle’s lost treasure. Again, all therein will be theirs, without question of ownership, if they will only deliver him the coral and shell flask.

As promised, your passage underwater is uneventful. After about an hour of slow progress, you have come to a cup-like depression in the shallow seafloor. It is filled with rock, live coral, and gracefully swaying water plants. This must certainly be the grotto you were told would be here.

4 Giant Lobsters (as giant crab but can move twice as fast backwards and has +8 to stealth) dwell in the grotto for safety. If two or more are slain in melee with the party, the remainder will flee.

Treasure: The lid of stone opens to reveal a large hollow in the rocky floor. In this place are 200 pearls [base 10 gp value], 6 pieces of jewelry made of polished coral, a helmet with enscrolled shells, porpoises, and the like  (acts as Mariner’s Armour), a gold chalice set with pearls (200 gp value), and the coral flask described by the mock dragon turtle. (If anyone inquires about the latter item, it is stoppered with lead and bears runes of strange type (Elemental Evil rune of Water, which radiates power.)

Shax, a huge marid (as a marid but with 238 (17d12+136) hit points and chaotic evil in alignment.  In addition it can grant a wish under certain circumstances) is confined within the specially dweomered flask. If a player opens the container and states that the marid is freed with the understanding that he will not harm the individual (and his or her associates) and will grant a wish, the marid will most grudgingly use his  alter reality spell to fulfill the wish expressed (perversely, if possible, of course) and then depart as quickly as he can. Otherwise, the marid is 50% likely to attack his benefactor. If attack is not indicated, the creature will simply get away.

Interaction with Mock Dragon Turtle: The ’turtle will be waiting on the beach when the party emerges from the water, and the griffon will be flying far above, spying on what the party is doing, but ready to dive and attack. If the party delivers the flask as agreed, the ’turtle will thank them and hurry off to a secluded spot where he can free the marid, have his form altered to that of a true dragon turtle, and return to his watery lair.  He will happily ferry the characters wherever they like and provide details of the surrounding environs.  The party can count on the dragon-turtle for aide in the future.

If the party will not hand over the flask, or if they have freed the marid, the mock dragon turtle will breathe gorgon breath and otherwise viciously attack the party. The griffon will arrive in a power dive on Round 2, doing double damage when he hits and having advantage on its “to hit” roll.  Both the ’turtle and the griffon will fight to the death in fury and despair.

0 thoughts on “The Mock Dragon Turtle”