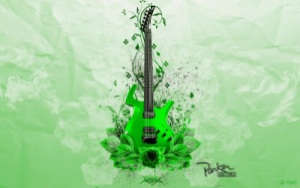 One of the fun things about the Iron Gods Adventure path is the ability to introduce all sorts of technological doodads into the game.  Paizo provide a free tech guide which has all sorts of interesting items in it.  However many of the items don’t work so well in 5e and need conversion.  There are also a lot of items I just can’t see my characters using and so it ends up just cluttering up their inventories (fire extinguishers? emergency beacons?).  There is also a real lack of slug-thrower weapons in the list and fun items.  The former I understand since the Divinity is more a Star Trek type ship than a Warhammer 40k type.

This doesn’t fit my setting very well so I ended up changing it.  More on that in a separate post.  Here, however, is an example of a fun item that one of my players requested – an electric guitar.

This item resembles a cittern but is heavier, has a reflective green sheen to it and clearly uses batteries.  It has a name in gothic on the side “RI-KEN-BOCK-ER”, perhaps the name of a bard college? This is an electric guitar and starts with 1d10 charges.  A charge can be expended to cast one of the following spells – barkskin, cure wounds and fog cloud.  The performers spell ability and related DCs are used for the spells cast from the guitar.  If the item is found in a timeworn state once it has exhausted its charges it can still be recharged and used as a normal electric guitar for related skills and tests.  This is an exception to the normal timeworn rules and many people would still consider it a magical item.

DM Note: I recommend that these are only found in a timeworn state to limit the potential abuse of the 1 charge = 1 cast ability of the guitar which makes it much more powerful than the equivalent version in the DMG.