Re-wrote this for my campaign and recently ran it.  The use of zones worked very well.  The Rhino made the battle … interesting, as the characters used it as a ram and mobile battle platform with fights occurring in and around and on top of the APC.  Because the characters approached from above as opposed from below the cultists were not surprised and had time to cast spells.  Diara had finished summoning the succubus and had cast enlarge as well.  She also managed to summon all three monsters with her summoning spells – a fiendish cockatrice, fiendish owlbear and fiendish carrion crawler.

Introduction
The PCs are tasked by the Brissa Klygvauther the High Priestess of the Cathedral of the Lawgiver to investigate the root cause of missing caravans in the vicinity of Sunder Horn.  These missing caravans coincide with the rumours of monstrous activity in the area.  She believes that if its some kind of monstrous bandit infestation they maybe using the old Knock on Wood Winery which is a decades-old, ruined estate just north of Sunder Horn along the Awzara River.   The cathedral has sent other adventurers into the area and none have returned which implies to Brissa that its more than just bandits (or its a serious lack of competence in the adventurers) and that she has the location spot on.  One caravan that survived an attack (due to a hardy contingent of guards and a bit of luck and courage) said they put down a red scaly, winged humanoid which sounds ominously like a fiend or dragonkin of some kind.  She will trade a raise dead (or similar spell or future favour) for the service.  Brissa will happily provide the raise dead spell before the completion of the task (so no one is waiting to play) so long as everyone submits to a quest spell.

As you come over the rise, your face is hit with another blast of hot wind. The wind blows steadily and incessantly, parching the land and all that is contains.  The sky is faded blue with not a cloud in sight.  Large birds maybe vultures wheel overhead. Songbirds and smaller animals have moved on or are resting during the heat of the day. The grasses and scrub brush rustle stiffly, just dried skeletons of their former selves. As you ride [walk] along, puffs of dust rise behind you. The grit seems to sift into everything; it is in your mouth, your nose, your gear, and your clothes. Before long, your face and hands begin to feel tight and red. There is little relief from the blowing.  The most interesting thing you have seen so far is another example of Nimmeria’s alien flora – a might dragon tree.  This tree is as large as a great redwood in cooler climes but it never stops burning.  It makes a great place to camp during the cool nights, albeit it a dangerous one as the dragon tree is a beacon to any wandering Nimmerian natives as well.

The distance is 75miles across grasslands from Chesed to the Knock on Wood Winery.  Random encounters occur once per 4 hours on a 17 to 20.   If an encounter occurs roll on the random encounter table.

Description
The cedar logs that compose the Knock on Wood Winery were milled and shipped from eastern Ustalav, and the fine lacquers used to varnish the logs have withstood many damp winters along the northern end of the Sellen River.

B1. Winery Front: The winery’s storefront once stored many of the bottles and barrels of rare or exotic alcoholic elixirs procured by its aficionado founders. While nearly all of these stores have been depleted, characters who thoroughly search the shelves and tipped-over racks find 2d3 bottles of various types of liquor 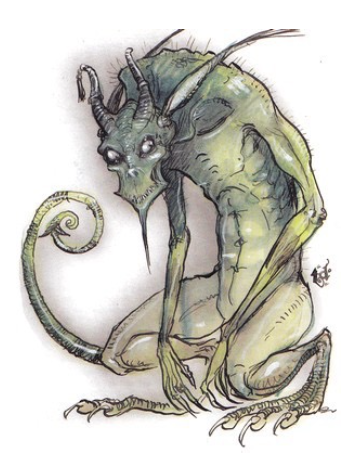 left intact. They have aged almost 50 years, so bottles of weaker sorts of liquors are long past their prime and barely drinkable.

B2. Ruined Tower: The builders of the Knock on Wood Winery used this squat tower to defend against roaming bandits or demons, but it has crumbled since its abandonment nearly half a century ago. The rotten crates and mossy stones in the tower conceal a small fortune hidden by bandits who camped here for a short time before demons killed them. The PCs can locate the treasure with a successful DC 20 Perception check. All in all, the burlap sack of ill-gotten gems and gold pieces is worth 2,200 gp.

B3. Ruined Rooms: An earthquake 20 years ago badly damaged this side of the building, leaving the bedrooms (which the owners rented to drunken patrons for a substantial fee) in ruins.

B4. Cellar: A maze of barrels and shelves makes this area difficult to navigate in the dark. At each intersection, there is a 75% chance one of the squares was trapped with a tripwire that brings an adjacent barrel down on a PC (the barrel has a +10 bonus on its attack roll and deals 2d6 points of damage to a struck PC). This is otherwise identical to a falling block trap. A tunnel dug into the eastern side of the cellar travels nearly 200 feet eastward before reaching an old barn.  (Encounter Total XP: 1,600).  Descending down the stairs the players will hear arguing/discussion from multiple voices on a successful DC 12 passive perception check:

Below, eight quasits roam about the otherwise abandoned wine cellar. If any of the traps in the wine cellar are tripped, these creatures turn their attentions to the intruders.

Hear chanting as you wander the tunnel.

B5. Barn: The earthquake that damaged the winery also damaged the southwestern portion of the barn. When the PCs arrive, Diara and her clergy of Lamashtans are hiding out in this run-down barn, summoning a succubus (Encounter Total XP: 3,050).

A poorly maintained barn has been erected about 200 feet from the winery. The barn is made of rough-hewn lumber and large stones, cobbled together. The barn has no windows, and in lieu of a door is a crudely tanned piece of leather stretched across the doorway.

B6. Hayloft: Wooden ladders on the barn’s northern wall lead up to a hayloft. While Diara’s minions are up there, they have drawn up the ladders so no one else can reach them.

ENCOUNTER
Diara Belgroom is a cambion who has spent much of her life traveling Avistan and has long been a worshiper of Lamashtu, Mother of Monsters. Throughout her travels, she has used both honeyed words and magical compulsions to slowly accrue a congregation of like-minded worshipers (six cultists).  She has also summoned demons and made pacts with Lamashtu and the goddess’s agents to secure the aid of extraplanar forces. Diara and her minions lurk in the winery for now; she plans to use the structure and its nearby barn as a base of operations until she has attracted more cultists and summoned a veritable army of demons for herself.

A Wagon: This empty wain were abandoned along with the winery a decade ago.  A wagon provides cover and is tall enough that a Small creature can move under it and gain superior cover. It costs 2 squares of movement to jump up onto a wagon. With a successful DC 17 Strength check (a move action), a character can move a wagon forward or backward 1 square.

Draft Horse: This draft horse (marked “H” on the tactical map) is tied to a hitching post and normally not easily spooked. However, once combat starts, any characters entering the indicated squares behind the horse are subject to attack (+6 vs. AC, 1d6 + 5 damage) since the creature lashes out with a kick. If hit by any attack, the horse breaks its rope and leaves the area at a run.

If demolished – barn wreckage, savannah, mushroom patch.  The barn isn’t in the best condition and if attacked (for example by the Rhino) it has five hit boxes of 25 hps each.  Only one hit-box can be destroyed at a time. Once three are destroyed the entire building collapses.

Mushrooms: Some squares have toxic mushrooms in them, in one of the varieties below. Roll 1d4 when a PC enters one of these patches to determine the variety. All mushroom squares are difficult terrain. PCs can figure out what the mushrooms do with a DC 15 Intelligence check ahead of time or after the fact by observing what colour of mushroom had what effect. Once identified, a DC 15 Acrobatics or Intelligence check allows a PC to enter a square of mushrooms without disturbing it.

Cloudspores: Described in the Dungeon Master’s Guide (page 67), cloudspores are brown. If a PC disturbs a cloudspore, it emits a cloud of spores that provides concealment (+2 AC) in that square for 5 minutes.

Shrieker Mushrooms: The purple/white mushrooms shriek when someone steps adjacent to or in their square.

Doomspores: These gray mushrooms, described in the Dungeon Master’s Guide (page 88), make a DC 16 Constition save if a PC steps into their square, dealing 1d10/5 poison damage and gaining the poison status effect (save ends).

Slumberspores: These red-capped mushrooms, when disturbed, make a DC 16 Wisdom saving throw of whoever disturbed them and all adjacent creatures. On a fail, a creature is slowed (save ends). If that creature is already slowed they fall asleep (unconscious, save ends).

Braziers: A character can tip over a brazier by making a DC 10 Strength check, or dealing 20 damage to it. When knocked over, the brazier makes a close blast 3 attack against each creature in the area; DC 16 vs. Dexterity; 1d10/5 fire damage, and ongoing 5 fire damage [save ends]).

DIARA BELGROOM
For Diara use the Cambion from MM pg. 36 with the following changes

Curse of Madness. If a creature targeted by Diara’s bestow curse spell fails its Wisdom save, that creature becomes filled with rage and madness. Whenever the cursed creature sees freshly spilled blood, it must succeed at a Wisdom save or it succumbs to the effects of a rage spell for 1 minute (adv STR, +2 dmg, Cant cast spells, resistance to B, P and S). A successful save means the creature is immune to the effects for 1 hour, after which the chance of raging upon seeing fresh blood returns once more.

In addition, creatures affected by Diara’s bestow curse have their alignments shifted one step closer to evil and become more receptive to the ideals of demon lords and chaotic evil deities. For most of the Kellid barbarians residing near Sunder Horn who were captured by Diara, the shift in alignment has turned them chaotic evil and made them devotees of Lamashtu.

Innate Spellcasting.  Diara’s spellcasting ability is Charisma (DC 14).  Diara, as a devotee of the Mother of Monsters and has the following modified spell list that she can innately cast requiring no material components:

CULTISTS
Use the cultist from MM pg. 345 with the following (thematic) changes.

The cultists wield falchions instead of scimitars and also wield crossbows:

0 thoughts on “DEMONS OF SUNDER HORN”