Keeping with the theme of changing 5e spellcasters to be more like 4e special abilities I removed her druid spells and turned the interesting ones into abilities or have them active already.  For example the spell entangle is replacing by Stab of the Entangling Wild.   I left the link to her prepared spells in her stat block. 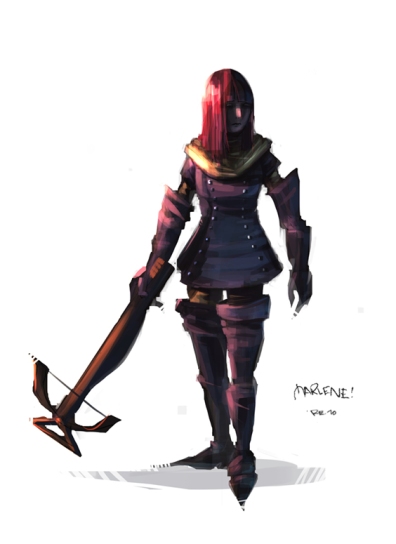 Fey Ancestry. Evet has advantage on saving throws against being charmed, and magic can’t put the drow to sleep.

Spellcasting. Evet is a 4th-level spellcaster.  Her spellcasting ability is Wisdom (spell save DC 12, +4 to hit with spell attacks). She has already cast bearskin and long strider.  Her other spells have been translated into spell-like abilities under Actions and Reactions.

ACTIONS
Multiattack. Evet makes two shortsword attacks.  If Stab of the Entangling Wild is available she can also make this attack.

Crank Crossbow. Ranged Weapon Attack: +7 to hit, range 100/400 ft., one target.
Hit: 9 (1d10 + 4) piercing damage, and the target must succeed on a DC 13 Constitution saving throw or be poisoned for 1 hour.  If the saving throw fails by 5 or more, the target is also unconscious while poisoned in this way.  The target wakes up if it takes damage or if another creature takes an action to shake it awake.

Crank Crossbow, Burst Fire. The crank crossbow can be used to spray a 10-foot-cube area within normal range with shots. Each creature in the area must succeed on a DC 15 Dexterity saving throw or take the weapon’s normal damage (see above). This action empties the magazine.

REACTIONS
Autumn Storm (Recharge 5 or 6). If a melee attack would hit Evet she may activate Autumn Storm.  All creatures within 10 feet of her must make a DC 12 Constitution save or take 8 (2d8) cold damage, lose 10 ft. of movement and be pushed back 10 ft.  On a successful save the target resists the secondary movement related affects.

DESCRIPTION
Even is the only non-evil member of the archaeological  team.  She has worked with Akradenn for many years.  He pays her well and gives her free rein to tame, breed and raise tyre’s which is what she loves doing.  She will not fight to the death and will escape if she can even if that means surrendering.

Evet also has a tyrg animal companion called Cindy.  If she suspects a fight she will cast longstrider and barkskin before the battle increasing her AC to 16.

CRANK CROSSBOW
This long-range weapon was developed by the Technic League for its hirelings.  It is similar to a standard crossbow, but it has a magazine that holds five bolts, requiring a small crank to advance to the next bolt.  It takes an action to reload it.  It can be used as a rapid-fire weapon shooting all five bolts at once.  Normally, a hireling will empty the magazine, then drop the weapon before entering melee.