To beef him up a bit I used the paragon rules from the AngryDM.  The showdown with Furkas occurred at with the Thought Harvester robot.  The party inadvertently put him to rest meeting the 3 minimum requirements of severing his emotional connection to The Choking Tower. 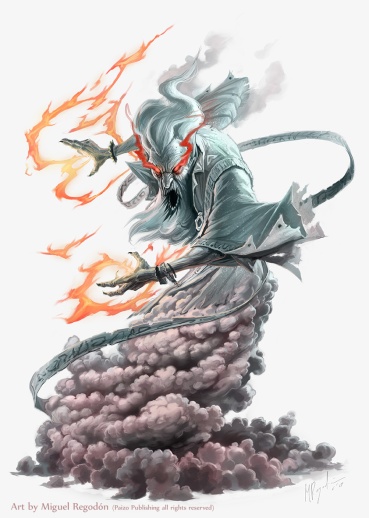 Ethereal Sight. Furkas Xou can see 60 feet into the Ethereal Plane when it is on the Material Plane, and vice versa.

Incorporeal Movement. Furkas Xoud can move through other creatures and objects as if they were difficult terrain. It takes 5 (1d10) force damage if it ends its turn in side an object.

Paragon Actions. Furkas Xoud acts like normal creature until reduced to half hit-points (“bloodied”) at which point he will grow in size and gain an extra action including being able to cast two spells per round (one per hit point pool) and gains one complete turn in each combat round, including one reaction between each turn, for each pool of hit points it has above zero. When a pool of hit points has been reduced to zero, the creature loses one turn each round thereafter.

Smoke Armour. The coils of smoke that surround Furkas Xoud are partially solid. They grant him a +4 natural armour bonus and 40 bonus hit points.

Spellcasting. Furkas Xoud is a 10th-level spellcaster. His spellcasting ability is Intelligence (spell save DC 17, +9 to hit with spell attacks). Furkas Xoud can cast disguise self and invisibility at will and has the following wizard spells prepared:

Horrifying Visage. Each non-undead creature within 60 feet (adjacent) of the ghost that can see it must succeed on a DC 15 Wisdom saving throw or be frightened for 1 minute. If the save fails by 5 or more, the target also ages 1d4 x 10 years. A frightened target can repeat the saving throw at the end of each of its turns, ending the frightened condition on itself on a success. If a target’s saving throw is successful or the effect ends for it, the target is immune to this ghost’s Horrifying Visage for the next 24 hours. The aging effect can be reversed with a greater restoration spell, but only within 24 hours of it occurring.

Possession (Recharge 6). One humanoid that the ghost can see within 5 feet of it must succeed on a DC 15 Charisma saving throw or be possessed by the ghost; the ghost then disappears, and the target is incapacitated and loses control of its body. The ghost now controls the body but doesn’t deprive the target of awareness. The ghost can’t be targeted by any attack, spell, or other effect, except ones that turn undead, and it retains its alignment, Intelligence, Wisdom, Charisma, and immunity to being charmed and frightened. It otherwise uses the possessed target’s statistics, but doesn’t gain access to the target’s knowledge, class features, or proficiencies.

The possession lasts until the body drops to 0 hit points, the ghost ends it as a bonus action, or the ghost is turned or forced out by an effect like the dispel evil spell. When the possession ends, the ghost reappears in an unoccupied space within 5 feet of the body. The target is immune to this ghost’s Possession for 24 hours after succeeding on the saving throw or after the possession ends.

Spectral Miasma (1 per long rest). As a free action, Furkas can summon a life-sapping mist that functions as fog cloud, except that Furkas can see through this fog normally. Living creatures that enter or start their turns within the spectral miasma take 2d6 points of necrotic damage; Furkas heals for the same amount of damage. Once created, a spectral miasma persists for 1 minute or until dispersed by wind or fire, whichever happens first.

During Combat Furkas’s actions in combat vary depending on where he’s encountered, but when he actually enters combat, he starts the battle by first casting fireball and follows that with his spectral miasma ability. He casts mirror image on the second round, and then follows that up with cloudkill, solid fog, web, and stinking cloud. He uses wall of force to trap victims in these areas, saving his damaging spells to target healers first and combatants last, while using his rod of gripping smoke to interfere with characters who attempt to attack him with weapons.

Morale Furkas’s morale depends on where he’s encountered— see Campaign Role on the next page. If he retreats to area G9, he uses his spectral miasma to heal at the first opportunity.