Some of the NPCs in Out of the Abyss are a little unique and I ended up doing quick conversions to have the right statblock on hand for my players.  Here is Jimjar.

At will: nondetection (self only)
1/day each: blindness/deafness, blur and disguise self
Cunning Action. On each of his turns, Jimjar can use a bonus action to take the Dash, 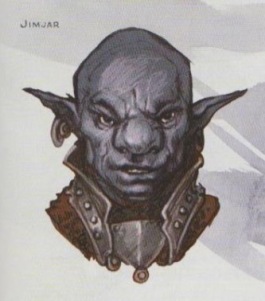 Stone Camouflage. Jimjar has advantage on Dexterity (Stealth) checks made to hide in rocky terrain.

DESCRIPTION
Treasure-seeking deep gnome gambler and thief. Jimjar is a bald gnome with rocky gray skin and a wiry physique. His pale eyes are overly large and expressive.

A male deep gnome spy , Jimjar is a feckless rogue with a devil-may-care attitude, a fondness for coin, and an obsession with betting on virtually anything and everything. Jimjar regularly offers bets on tasks at hand (“I bet you ten gold you can’t get past that sentry without being seen”) to the outcomes of random events (“I bet you twenty gold this tunnel is the right way”). He sometimes uses betting to goad others into doing things, but characters can easily turn the tables knowing that Jimjar finds it difficult to refuse a wager. His behaviour is unusual for the dour deep gnomes, and others of his kind (including Topsy and Turvy) find Jimjar annoying at best, and unstable and potentially mad at worst.

Jimjar appears to be true to his word, and he manages to keep exact track of his debits and credits in his head, paying up on his bets (or demanding payment) as soon as possible. He’s not above pocketing a little extra coin when no one is watching, and he has an amazing ability to secret significant wealth on his person.

Jimjar feels as though there’s something odd about the twins Topsy and Turvy, but has no insight into what their secret might be. He does his best to get along with everyone and act as a go-between for the party and followers whenever able, although some find his gregariousness and constant wagers grating.