Continuing on from part 1, part 2, part 3 and part 4 with our visit into the past of Nimmeria here is another updated gearsmen guarding Xoud’s lab at the Technic League Compound. This is a range attacker/annoyance model. After two of these dropped their vile conflagration nanite bombs on top of the party at the same time they took them seriously and started focus firing on them whenever they met one.  A combination of the original repair bot and the flameskull. 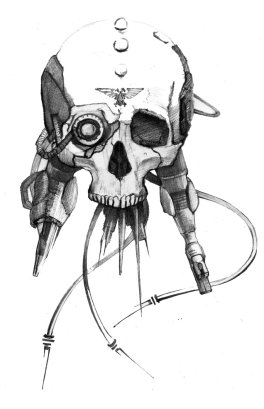 Gift of the Machine God. As a creature of technology, a guardian-skull gains many damage and condition resistances and immunities but it is also susceptible to lightning attacks.

Magic Resistance. The guardian-skull as a technological creature has an intrinsic resistance to magic gaining advantage on saving throws against spells and other magical effects.

Mechanical Fury. While the guardian-skull is bloodied, it deals an extra 1d8 damage with its attacks.

Vile Conflagration (1/day). The guardian-skull detonates a nanite grenade in a 20-foot-radius sphere at a point of its choosing within line-of-sight. Each creature in a 20-foot-radius sphere cantered on that point must make a Dexterity saving throw. A target takes 4d6 fire and 4d6 necrotic damage on a failed save, or half as much damage on a successful one. The fire spreads around corners. It ignites flammable objects in the area that aren’t being worn or carried. The guardian-skull can exclude two allies from the effect.

REACTIONS
Defensive Systems (2/day). When hit the guardian-skull may activate a temporary force field (as the shield spell) or an optical displacement system (as the spell blur).

DESCRIPTION
Designed with a somewhat reinforced structure and fitted with a single efficient weapon system and targeting selection programs, Guardian-skulls (also known as Gun-skulls and Combat-skulls depending on their armament) are uncommon but prestigious and effective bodyguard devices. Their small size, tireless vigilance, and ability to hover in the shadows silently make them surprisingly discreet and effective servants.