The Rain of Stars not only brought strange fauna with it but strange flora as well.  Nimmeria can go from barren wasteland of yellow and brown to areas bursting with colour where alien flora has taken root.  I pictured Nimmeria something similar to the mix of fauna and flora from Defiance but took many of the specific inspirations from the game Endless Legend.  I try to sprinkle these “snippets” of descriptions into any outdoor travelling that occurs mixing them in with normal descriptions of the landscape (e.g. vast grassland with patches of glasssilk).  Makes for quite an alienscape.  Here are some examples. 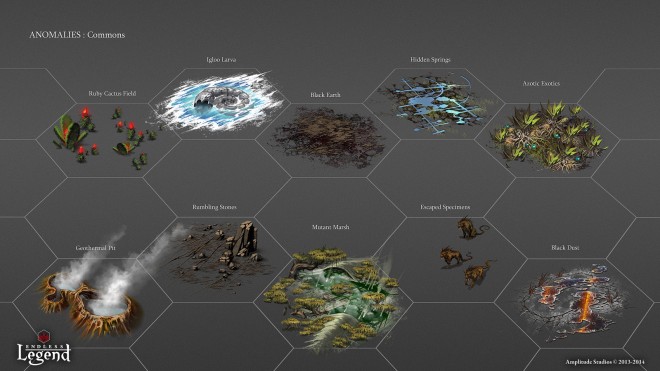 Blood Crystal: Long rumoured to be a vital ingredient in the concoctions of crones, it is now known that a draft composed of Blood Crystals elevates a warrior’s pain threshold, making him more resilient to enemy blows.

Dust Orchid: Related to the cacti family and able to grow in a staggering diversity of climates, Dust Orchids are pretty but considered an invasive pest. Though their golden blooms are hypnotic to watch.

Dustwater: Bubbling up in fetid pools, raw dustwater is a type of Nimmerian fluid that has a consistent affect – a hallucinogenic of mind-shattering power- the province of torturers and madmen. Properly administered, however, the amber liquid endows strong-minded individuals with great insight.

Glassilk: These grass like fields are made from glass.  Beautiful to see but deadly to traverse.

Hydromiel: Long deemed an edible curiosity of little value (the fruit is delicious, but swiftly triggers indigestion), some scholars are attempting to turn the fruits into an important staple of the Nimmerian diet.

Meteor Fields: Ice-covered debris from the skies of Nimmeria, many strange treasures lie within these rocks.

Moonleaf: Trees of white leaves that gleam in the moonlight these small forests are supernaturally peaceful.  The leaves seem to drink the moonlight in.  Some have turned the leaf into a soothing tea.

Quicksilver: Although the exact mechanism is still poorly understood, weapons and armour forged with small quantities of Quicksilver have some capacity to learn from battle experiences.  Technic League scholars suggest that the deposits are melted slag from the vessel that crashed into Nimmeria.  Or potentially hardened nannite fields that retains some sentience when reforged.

Redsang: A lichenous growth, redsang has long been known to make a pungent spice used to pep up bland meals.

Titan Bones: Kellid tribes, fearing they would invoke terrifying spirits, did not disturb the graves that held these ossified remnants. Modern artisans feel no such anxiety, however, and craftsmen gleefully plunder these ready-made girders.  They seem to be the remnants of gigantic robots who have been conquered by the elements.

Golden Tree: Wind-blown spores of a golden substance locally called dust seem to be drawn to this magnificent tree, whereupon they knit themselves into the slender branches.

Wizard Stone: The centrepiece of this stone arch resembles a huge flaming eye. Lustrous objects flex and jolt in its proximity – a portent of strange magics.

Dragon Tree: Gnarled roots and blackened trunks end in flame-tipped branches. Their uses are legion. Farmers gather their ashes, builders fell their timber, and fire-mages climb them to learn their secrets.

Moss Pearls: A beguiling hum accompanies the phosphorescent light of these strange plants, and visitors who eat the delicious fruits claim to have inspirational visions.

Azotic Exotics: A fecund stench emanates from these weird plants, the earth around them a fertile compost. Crops planted here show astonishing growth.

Rumbling Stones: In this place of constant geological turmoil, footing is dangerous but mining is profitable.  The stone seem to move on their own.

Geothermal Pit: These geologically active sites are noisy, warm, and a good source of energy.  Steam, lava and other strange elements randomly burst from the spouts.

Salt Desert: The preservative properties of salt are well known. This site improves the longevity of food stocks, and provides a valuable trade commodity.

Black Dust: A form of naturally-occurring deposit, these springs of gold and black provide a source of never-ending fuel.

Mutant Marsh: Fetid gases bubble up amongst a profusion of riotous plantlife. Who knows what strange elixirs might come from such a morass?

Igloo Larvae: A strange breed of worm grows an igloo-like shell around itself, then abandons it to grow another. These become huts for living, storage, and emergency shelter in cold climates.

Ruby Cactus Fields: A hot climate plant whose hard red fruits can be used by craftsmen or sold as jewellery.

Massive Tree: The mutant touch of the Rain of Stars affected even plant life.  An abomination of a tree, the trunk is a grotesque medley of a hundred differing barks and the canopy reveals a dozen types of foliage. Timber and fruit will certainly be plentiful.

Life Tree: The canopy of this enormous tree houses a cornucopia of life that is equally welcome in the alchemist as to the cook.

Ice Sculptures: The sonic properties of these cathedrals of vaulting ice is remarkable; sounds are swallowed or amplified depending on your location.

Botanical Garden: Grids of neatly-rowed plant species slice this ground, the positions of the many varieties seemingly sown very deliberately by an invisible hand.

Weaver Worms: Giant silkworms furrow these ice sheets, leaving behind great roads of magical thread. As well as being incredibly strong, the silks can be woven into fabulous fabrics.

Stasis pillar: The skin prickles close to this eye-defying wonder, and no birds fly in its vicinity. Natural philosophers travel for leagues to analyse its properties.

Earthspine: Local dwellers refer to these white shards as the Leviathan’s Spine. Adventurous folk often scale these columns to gather the unusual crystals embedded in the rock.

Geysers: Superheated steam blasts skywards then cascades to the ground. These wonders turn a philosophers’ minds to the workings of the subterranean world; a builders’ to its exploitation.

Mychordia: The gaping maws of these leathery growths are reminiscent of benthic horrors, yet seductive music emanates from their mouths and their flesh makes a pungent bread.

Crystal Flowers: The delicate fronds of these glacial plants wax and wane with the sun, inspiring the study of heat. When crushed, small quantities of golden dust are released. 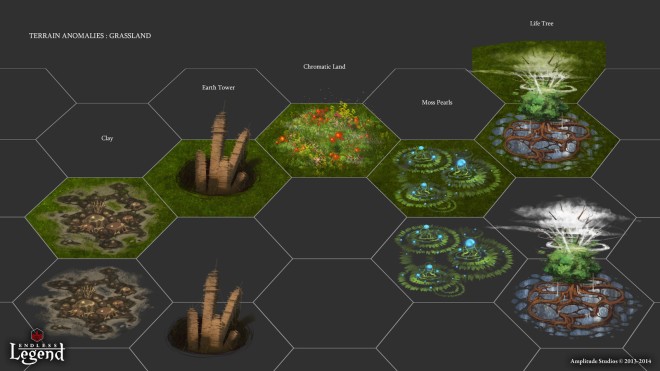