Previous entries in this series “Into the Past“:

Finally, the man himself, Furkas Xoud – before he was killed and turned into a ghost.  My players decided to negotiate with him instead of fighting and so I never got to play this version in combat.  A shame, he looks pretty dangerous.   A nearby hologram projector produces a hardlight hologram, this creatures stat-block follows Xoud. 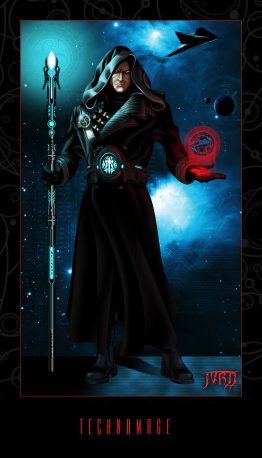 Arcane Shield.   Enemies that end their turn next to Xoud are pushed back 5 feet.  The aura dissipates when Xoud losses a paragon hit point pool.

Paragon Actions. Furkas Xoud gains one complete turn in each combat round, including one reaction between each turn, for each pool of hit points it has above zero. When a pool of hit points has been reduced to zero, the creature loses one turn each round thereafter.

Preparation. Xoud casts these spells on himself before combat – mage armour, stoneskin and fire shield.

Smoke Armour. The coils of smoke that surround Furkas Xoud are partially solid.  They grant him a +4 armour bonus and 40 bonus hit points.

Nuclear Winter.  All creatures within a 20-foot cone of Xoud must make a DC 17 Constitution save or take 11 (1d10 +6) cold damage, and ongoing 5 cold damage and the target is slowed (save ends both).

Flash Bang (Recharges when first bloodied).  All creatures within a 20-foot sphere of a point Xoud chooses within 50 feet must make a DC 17 Dexterity save or take 21 (3d10 +6) thunder and radiant damage, the target is pushed back 10 feet and is blinded (save ends).

Prismatic Beams (1/day).  All creatures within a 25-foot of Xoud must make a DC 17 Constitution, Dexterity and Wisdom save or take (save ends each effect).

Temporal Warp (Recharges when first bloodied). Xoud warps time, allowing him to act faster than those around him. For the rest of this round, Xoud gains a +2 bonus to all defenses. In the next round, Xoud acts three times, at initiative count 30, 20, and 10.  At each of these counts, he gets to perform an attack action, a move action, and a bonus action.  At the end of this round, Xoud takes 5 damage.  In the round after that, he acts normally at his original count in the initiative order.

REACTIONS
Gravity Crutch (1/day).  If Xoud is pushed, flung or otherwise moved he takes no damage from the fall, regardless of the distance, and does not fall prone at the end of the fall.

Ward. As a reaction Xoud can raise a digital shield cancelling any magic missile attack and adding +4 to his AC for that attack and until the end of his next turn.

Spellbender.  Xoud can use any available magic related action (all actions except dazzling touch).

DESCRIPTION
This wizard wears a black hooded robe and is bedecked with all manner of technological devices.  Xoud has not quite become evil yet but he is well on his way. I f the characters kill him a contingency will activate teleporting him to safety. Having said that, he is open to negotiation as any group that can get this far is a real threat. If talked out of combat (8 successes before 3 failures, using any Charisma based skill and History) he will gladly trade 1 technological item for knowledge about the future or Silver Mount.

Insubstantial.  The hardlight hologram can move through other creatures and objects as if they were difficult terrain.  It takes 5 (1d10) force damage if it ends its turn inside an object.

ACTIONS
Spectral Weapon. Melee Spell Attack: +4 to hit, reach 5 ft., one creature.
Hit: 10 (3d6) force damage.  The target must succeed on a DC 10 Constitution saving throw or its hit point maximum is reduced by an amount equal to the damage taken via a nanite infection.  This reduction lasts until the creature finishes a long rest.  The target dies if this effect reduces its hit point maximum to 0.

REACTIONS
Spectral Dance.  When an attack misses the hardlight hologram it may move up to 15 feet without provoking and make a spectral weapon attack at any point during that movement.  It gains a damage threshold of 5 until the start of its next turn.

DESCRIPTION
Appearing as a man made of hard blue smoke it doesn’t seem all there.