Meyanda was the first NPC I converted to 5e and she is the final boss (SPOILERS!?) of the first adventure Fires of Creation. 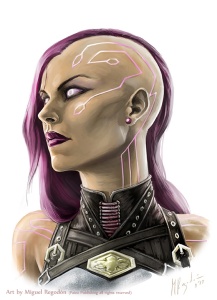 Gift of the Machine God. As a creature of technology Meyanda is immune to disease, poison and psychic damage.  It cannot be charmed, frightened, parlayed, petrified, stunned, exhausted or put to sleep.  It does not need to sleep, eat or breathe.

Hellion’s Eminence. As a bonus action, the priest can expend a spell slot to cause its melee weapon attacks to magically deal an extra 10 (3d6) necrotic damage to a target on a hit . This benefit lasts until the end of the turn . If the priest expends a spell slot of 2nd level or higher, the extra damage increases by ld6 for each level above 1st.

Deadly Aim. Meyanda has -1 to hit and +2 to damage on range attacks.

Spellcasting. Meyanda is a 5th-level spellcaster. Her spellcasting ability is Wisdom (spell save DC 15 , +6 to hit with spell attacks).  Meyanda has the following cleric spells prepared:

REACTIONS
Berserk Flailing.  When the Meyanda has lost half of its hit points it immediately uses Spiked Gauntlet against each adjacent enemy.

Implacable.  When Meyanda drops to 0 hit points for the first time she regains 10 hit points and fights on.

Nanite Surge.  Meyanda may gain advantage on one d20 roll per day.  Her “tattoos” glow when she uses this ability.

GEAR
Meyanda carries a Black Nanite Hypogun with 5 charges that provides 2d8+3 healing when used or the effect of lesser restoration.  She also carries 2 nanite canisters with 10 charges a piece which can be used for either her hypogun or inferno pistol.