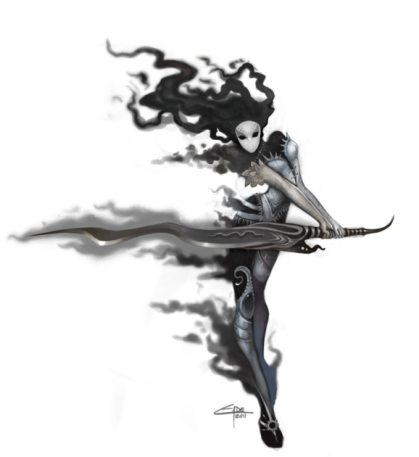 Babble. Anada Visk babbles incoherently while it can see any creature and isn’t incapacitated. Each creature that starts its turn within 20 feet of Anada Visk and can hear the babble must succeed on a DC 10 Wisdom saving throw. On a failure, the creature can’t take reactions until the start of its next turn and rolls a d8 to determine what it does during its turn. On a 1 to 4, the creature does nothing. On a 5 or 6, the creature takes no action or bonus action and uses all its movement to move in a randomly determined direction. On a 7 or 8, the creature makes a melee attack against a randomly determined creature within its reach or does nothing if it can’t make such an attack.

Composite Creature. A combination of a hungry fog and an allip Anada Visk has two separate initiative counts, two separate hit point pools as well as two actions per turn.

Gaseous. Anada Visk has a body composed of eerie mist. It can pass through small holes or narrow openings, even mere cracks, but cannot enter water or other liquid.  Anada Visk can enter a creature’s space and stop there. Each time that creature starts its turn with Anada Visk in its space, the creature must succeed on a DC 14 Constitution saving throw or be poisoned until the start of its next turn. While poisoned in this way, the target is incapacitated.

Incorporeal Movement. Anada Visk can move through other creatures and objects as if they were difficult terrain. It takes 5 (1d10) force damage if it ends its turn inside an object.

Regeneration. The nature of the symbiotic relationship allows Anada Visk to regain 10 hit points at the start of her turn Anada dies only she it starts its turn with 0 hit points.

Sunlight Sensitivity. While in sunlight, Anada Visk has disadvantage on attack rolls, as well as on Wisdom (Perception) checks that rely on sight.

DESCRIPTIONS
This composite creature is an allip and a hungry fog in one symbiotic form.